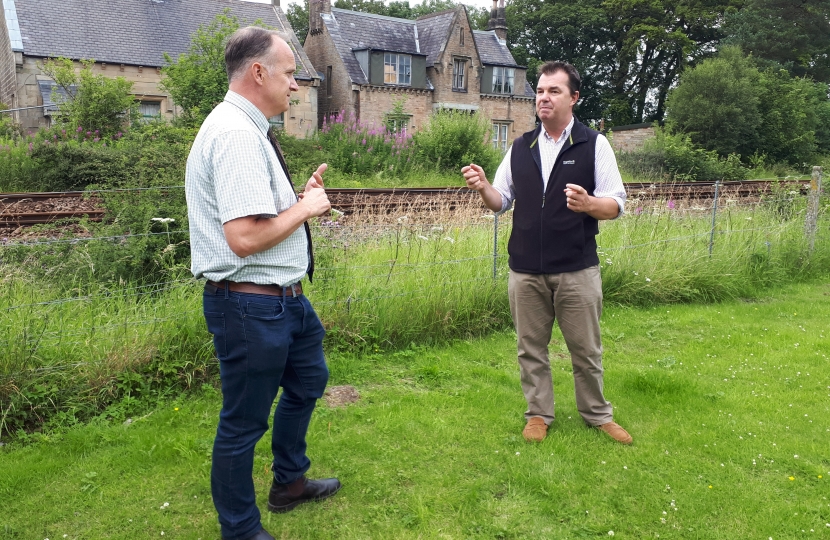 The ‘Restoring Your Railway’ Fund was announced in February 2020 by Transport Secretary Grant Shapps MP. Throughout last year the subsequent application for the re-opening of Gilsland Train Station, led by Northumberland County Council and Guy Opperman, has been progressing and has now gained support from Railways Minister Chris Heaton Harris MP. This high level support was secured following a meeting just before Christmas between Guy, the Minister and Neil Hudson, MP for the Penrith & The Border. In a follow up to the meeting the Minister wrote to Guy in which he praised the local coalition of MPs, councils, the National Park Authority, rail user and the community groups which have come together to back the proposal for a new railway station at Gilsland.

‘I am grateful for the work done so far by yourself, the local community, the Tyne Valley Community Rail Partnership, the local authorities and everyone who supports this project.

‘As the Minister responsible for Restoring Your Railway I wanted to make a number of points. I can confirm that the reopening of Gilsland Railway Station is the type of scheme that I am keen to help progress. As you are aware, any scheme must go through the usual processes to demonstrate value for money.’

He concludes his letter by saying:

‘Ultimately, I want to make it clear that I am an enthusiastic supporter of the project, which on initial assessment appears to fit in with the desire of government to regenerate the north, level up, and improve transport connectivity, and economic opportunity. I look forward to us working collectively at DfT and across the north to turn this project into a reality.’

‘I am delighted that our long campaign continues to make progress and now has this support from the Railways Minister. I am hugely grateful to my colleague Neil Hudson MP, who is leading the campaign on the Cumbria side and making real progress in galvanising further support.  We will continue to press the case within Government and do all we can to support the Northumberland County Council team who are doing such a great job of taking this vital application forward.’

‘I am really happy to be working with my colleague and neighbour Guy Opperman MP on this important project. If we can re-open the station at Gilsland it will be such an important shot in the arm for our local community. It will improve connectivity for local people, help the economy and help people enjoy the fantastic environment in this part of the world, not least the amazing Hadrian’s Wall trail.’

The application to re-open Gilsland Station has been sponsored by Hexham MP, Guy Opperman and has the backing of Dr Neil Hudson MP (Penrith & The Border), Northumberland National Park (NNP), the Tyne Valley Rail User Group (TVRUG) and the Tyne Valley Community Rail Partnership (TVCRP), the local Campaign to Open Gilsland Station (COGS), Hadrian’s Wall Partnership and a number of councils which span across the Northumberland/Cumbria border area.

The station at Gilsland was first opened in 1836 and served the community for 130 years, until it was shut in 1967 as part of the Beeching cuts. The proposal from Northumberland County Council is to reopen the station in order to boost the local economy in terms of increasing visitor and tourist opportunities to the world heritage site on its doorstep, as well as increasing residents’ access to employment, services and economic opportunity.  The Department for Transport recently announced a £500M pot of money for transport infrastructure investment, of which at least £20M has been assigned partly for feasibility studies as to the re-opening of old railways stations like Gilsland.